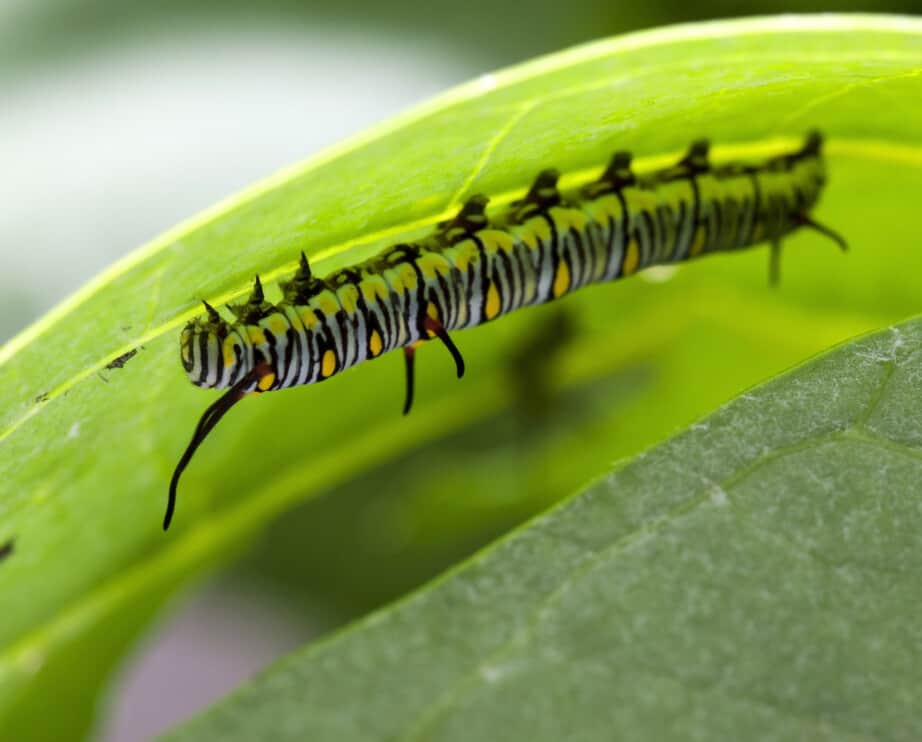 If you’ve ever had a caterpillar crawling on your skin, you’ve probably felt what seemed like thousands of legs inching slowly up your body. But, since caterpillars are considered an insect, that means it only should have six legs, right? Now you’re probably wondering what the heck was going on.

Caterpillars have 16 legs in total! Since caterpillars are insects, they only have six true legs that allow them to grasp onto surfaces. There are an additional ten legs (known as prolegs) that are stubby and aid in grip and the inching motion.

To fully understand whether or not caterpillars actually have legs, you need to understand the anatomy of the caterpillar. So, we’re going to be reviewing the differences between the true legs and the prolegs and what each does.

Because a caterpillar is considered to be an insect, it technically only has six legs in total, most often referred to as “true legs.” These three pairs of true legs are all located on individual regions of the caterpillar’s thorax, which is the first section of the body right behind the head.

Let’s go over the basic anatomy of the caterpillar and the role that the true legs play in the survival of this insect.

How Many True Legs Caterpillars Have

Behind the head of the caterpillar are two main sections. The first is called the “thorax,” and the next is called the abdomen, which we’ll get to a little later on.

The thorax is considered to be the upper body of the caterpillar that’s broken into at least three sections, sometimes referred to as T1, T2, and T3. On each of these sections is a pair of symmetrical true legs.

In total, a caterpillar has six true legs, just like every other insect in the animal kingdom.

What True Legs Do

Since the caterpillar only has true legs in the thoracic region, the purpose of these legs is quite limited. It’s first important to note that these legs have small claws at the end that proved to be quite useful to the caterpillar.

The main purpose of the true legs is to allow for movement while also keeping the caterpillar anchored to whatever surface it’s crawling on.

They also come in handy when it comes to gnawing on leaves, as the hooks on the end allow a caterpillar to grab onto leaves with ease.

When a caterpillar latches onto you as it’s crawling across your skin, it’s actually sinking these minuscule hooks into your skin to provide grip.

There’s no suction cup mechanism to the caterpillar’s legs.

If you felt like the last caterpillar that walked on you had way more than six legs, you’re technically not wrong.

In fact, caterpillars also have what’s called “prolegs,” which are basically false legs that help a caterpillar to maintain a walking pattern. The number of legs will depend on the species of caterpillar, but most have five pairs of prolegs.

Let’s go over what the purpose of the prolegs really is in caterpillars and where they’re actually located on the caterpillar’s body.

How Many Prolegs Caterpillars Have

There are two sections of the caterpillar’s body, and we already focused on the thoracic region. In this section, we’ll be focusing more on the abdomen, which is where the prolegs actually sprout from.

When you add up the true legs and the prolegs of the average caterpillar, you’re looking at around 16 legs in total.

If you’ve ever taken a close look at a caterpillar’s back region, you’ve probably seen the prolegs and assumed they were actual caterpillar legs. Instead of looking like regular legs, prolegs tend to have a stubby appearance and are usually the color of the caterpillar.

Some even look similar to suction cups.

The prolegs are perhaps the most important legs on the caterpillar’s body when it comes to actual movement.

The prolegs are known for having a great grip and allowing the caterpillar to easily attach to whatever surface it’s crawling along. Though the grip is impressive, the prolegs also release quite easily for quick movement.

When you look at the central region of a caterpillar, you’ll also notice that there’s an entire midsection without any legs at all (proleg or true leg). This absence of legs doesn’t impact the motion of the caterpillar, as a combination of the prolegs and true legs create the “inching” motion in some species of caterpillars.

These prolegs do disappear when a caterpillar becomes a butterfly or moth.

Though there’s no doubt that a caterpillar has 16 legs or less, it always seems like there are practically hundreds more as the caterpillar is crawling on you.

So, why is that the case?

Well, you need to consider how small a caterpillar’s legs really are and how far they can move with every step. Every time a caterpillar takes a single step forward, you’re feeling the tickling of 16 legs moving at the same time. Even having a caterpillar on you for a few seconds might mean you feel hundreds of leg movements.

Rest assured, there are only 16 legs maximum on a caterpillar, though it definitely feels like more every second.

It makes sense as to why caterpillars have 16 legs, as they’re quite small and entirely dependent on their legs to get them from point A to point B. This is the only way they’d have access to leaves for food and to get away from predators.

When a caterpillar enters into its cocoon on its trek to be a butterfly or a moth, it practically breaks down its own body until it’s just bare bones (or organs). It then rebuilds itself into a butterfly and leaves the unneeded structures behind.

In the process, the nubby prolegs are lost. But think about it. Why would a butterfly need prolegs in the first place?

After all, butterflies can fly to get to where they’re going and no longer have to depend on prolegs to crawl across surfaces.

Therefore, there’s no real need to have these prolegs that have incredible grip when they won’t be using them at all as an adult butterfly.

While the insects still DO have legs, they aren’t nearly as reliant on them as they where during their caterpillar stages.

Given the fact that caterpillars are classified as insects, they technically only have six legs that grow out of the thoracic region of the caterpillar’s body. Yet, there are also prolegs that help the caterpillar to move.

The actual number of legs that a caterpillar has depends on the exact species of caterpillar.

For the most part, a caterpillar will have 16 legs in total (six true legs and ten prolegs). When a caterpillar makes its transition over to a moth or a butterfly, only the true legs will still remain. 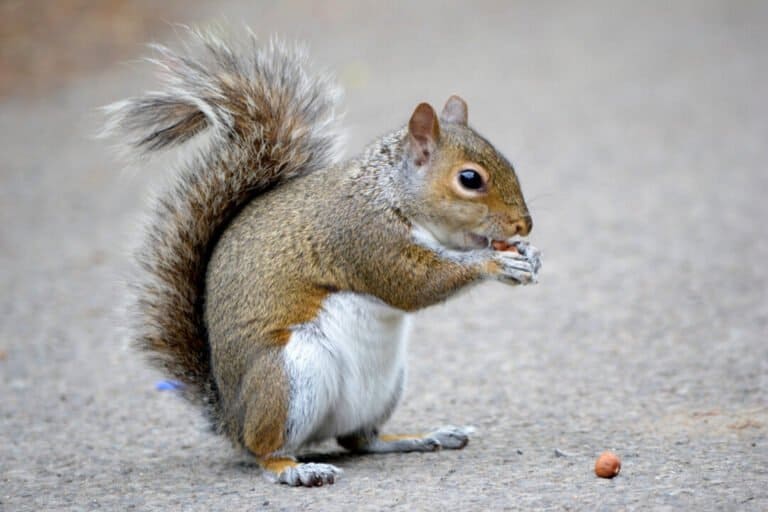 We see them all the time. Whether you live in the city or the country, squirrels are all over the place. Sometimes, petting one looks… 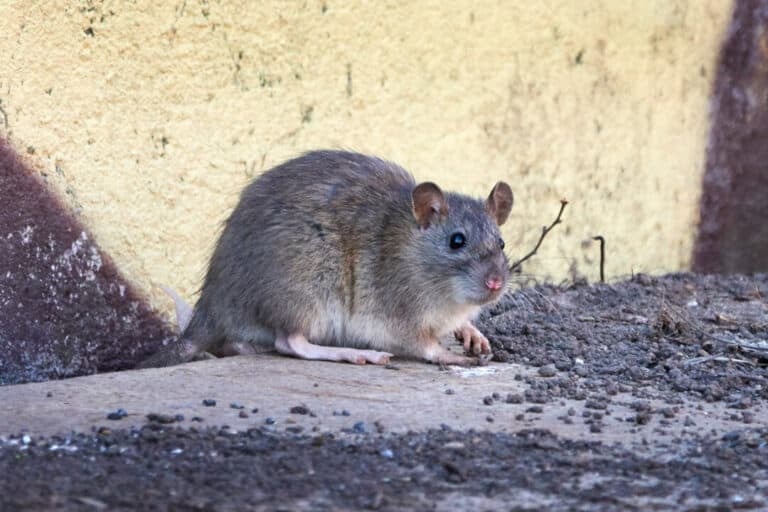 “Wouldn’t it be great if more rats would come out during the daytime when I’m awake?” Thought probably no one ever! But if we don’t see… 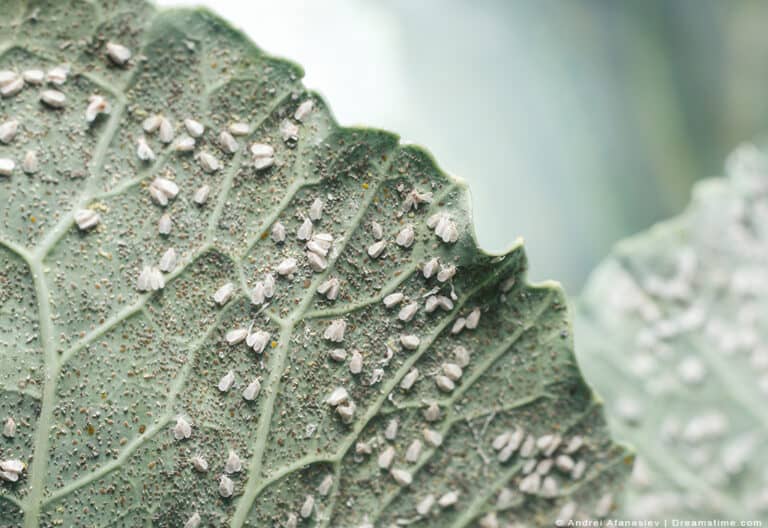 With more and more information available about how destructive pesticides are, gardeners and farmers alike search for ways to naturally repel pests. This includes the… 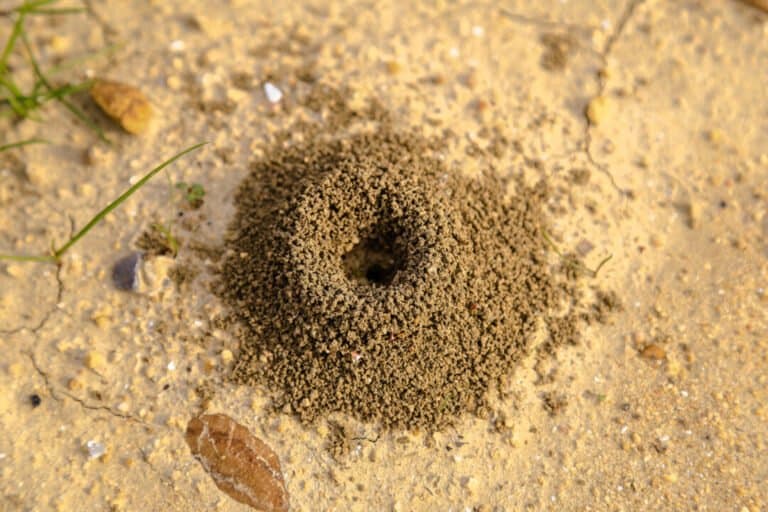 If you have anthills in your yard, you know how ugly and annoying they are. They ruin the overall aesthetic of your property and can… 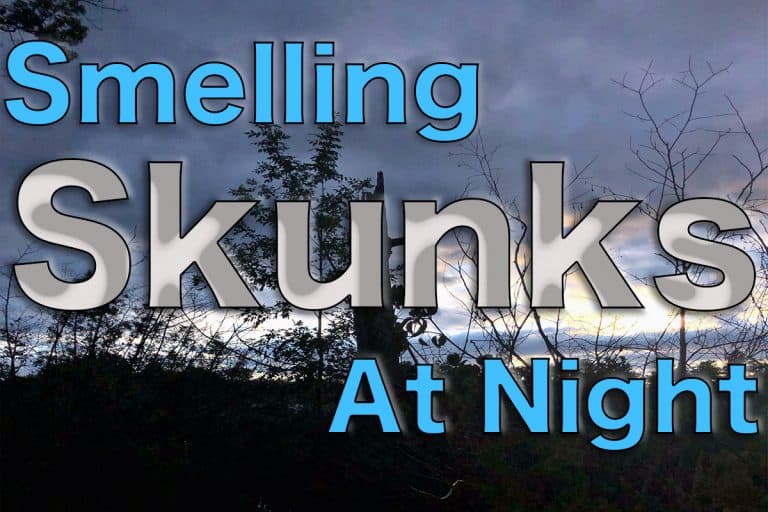 Have you ever been sprayed by a skunk? Hopefully not. I haven’t, but my old dog Bluto got into it with a skunk one evening,… 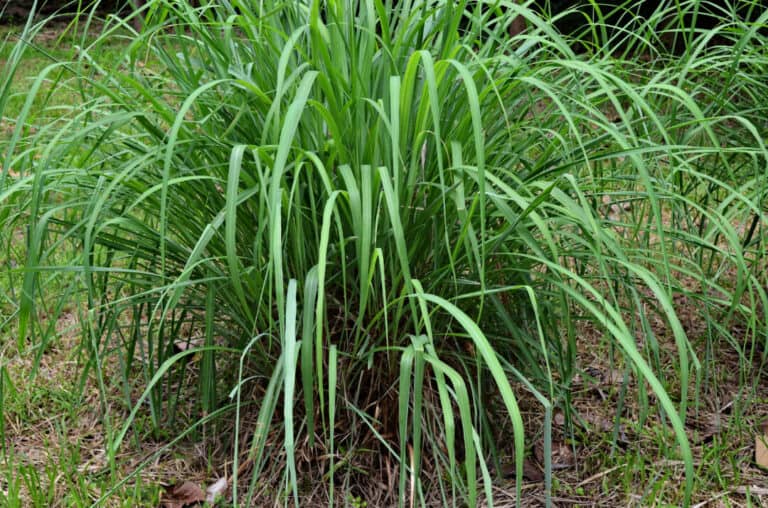