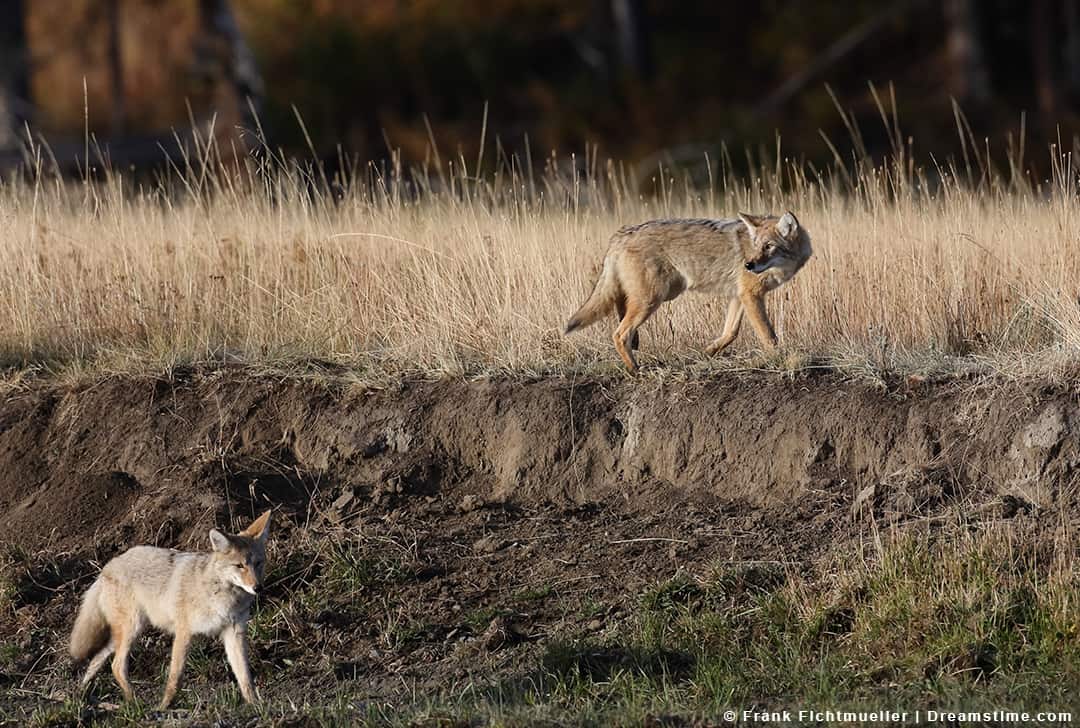 You have probably heard the howling of a coyote. If not in person, then at least in some type of media. The sound of the long, drawn-out howl is instantly recognizable and sure to make your head perk up an inch or two. Fortunately, there are some sounds that coyotes hate that can keep them at bay.

As a general rule, hazing coyotes and startling them with sudden noises can deter them. Effective hazing noises that can deter coyotes include shouting authoritatively, making loud and startling banging noises, and sounding sirens and alarms.

Coyotes can be a nuisance because of their wily nature. They tend to be opportunistic and can cause trouble in suburban and urban neighborhoods. The good news is, you can use sounds and noises to deter them from coming near your property.

Interested? Read on to find out the BEST sounds to deter coyotes.

If you are inside your house when you happen to see a coyote in your yard, you can act fast. Grab a few pots and pans before heading outside. You can even grab the garbage lid if it is detachable.

Colorado Parks and Wildlife suggests banging the pots, pans, garbage lids, and any other similar item. Coyotes will be intimidated by the noise and should scurry away.

The best part about this noise is that there’s no need to buy special equipment. Chances are you already have pots and pans in your kitchen!

Use Noise Makers to Repel Coyotes

If you have attended events, play sports, or own any outdoor equipment, chances are you have some type of noisemaker.

Since we have established that loud noises are something coyotes hate, air horns and starter pistols should be able to scare coyotes off. Even something as simple as a whistle could work.

Loud whistles that emit a sonic blast are available online or at any outdoor shop. Their high-pitch noise will irritate a coyote’s sensitive hearing.

If you’re hiking, or would like to have a strong whistle around, take a peakski at HyperWhistle: The Original Worlds Loudest Whistle. It’s very useful while outdoors.

Unfortunately, these types of loud sound makers do not usually go over well with the neighbors, so be sure to keep that in mind.

One easy and quick way to make sounds that a coyote hates is to purchase something like Ideal Security’s Wireless Motion Sensor with Alarm.

Coyotes do not like loud noises like alarms and sirens. Motion sensor alarms emit noises that mimic these and even better, pairs the combo with a light! So, if a coyote is approaching your yard during the night time, the light will confuse it even more, making the stimulus of the sound even stronger.

Just be wary of any nearby neighbors, and let them know you’ll be placing a coyote alarm in your area so they don’t get startled as well!

If you are particularly crafty and want to use household items, you can make something called a coyote shaker. This method is effective, inexpensive, and incredibly easy to construct yourself.

Stanley Park Ecology Society teaches us what we need to make a coyote shaker:

Once you have acquired these items, follow these simple steps:

Now you have your coyote shaker!

When a coyote is near you, shake the can vigorously and the sound of the pennies and stones smacking within the aluminum-wrapped soda can will help to frighten coyotes away.

It’s best to yell and shout at the coyote when you’re doing this, to get some added noise in as well.

Use Your Voice and Arms to Deter Coyotes

In most instances, healthy coyotes are not an animal that should cause extreme fear or alarm in a human. Coyotes are naturally timid, but generally stay in packs and away from larger prey.

When a coyote wanders into your yard, or you happen to run into one on a hike, your first instinct may be to run. It’s important to disregard that urge.

Running can cause a coyote to become more alert, and may even convince it that you are prey.

A more appropriate way to react to a coyote is to make another noise they don’t particularly like: Use your voice and shout as loudly and deeply as you can.

Speak with authority and, at that moment, accept that you are the one in control of the situation. Coyotes do not like loud voices that are aimed toward their general direction.

You can also wave your arms around and even clap your hands. All of these sounds should scare the coyote away.

Let’s Wrap It Up!

Coyotes in general are timid animals who will tend to their own business.

In urban areas, some of these tactics may be a bit less effective because of habituation, which means they are used to human population. You can learn more about ways to keep coyotes away in the long term by reading here.

However, if one or more appears in your yard, making sounds that coyote hates is one of the best methods to scare them off.

To recap, the following are excellent ways to elicit a sound that will deter coyotes:

These are the sounds that are most likely to scare a coyote off. It’s important to remember that coyotes are a part of nature, and are bound to come in contact with people due to expanding populations.

In most instances, coyotes are just trying to do their thing and survive in the wild outdoors. This doesn’t mean we WANT them close to us, so use the sounds listed above to send these wily coyotes scurrying!

Although cute from a distance, squirrels can be surprisingly destructive – especially when they set their sights on your home or garden. Squirrels mate and have offspring twice a year, meaning that...

Raccoons - they can invade your home, personal space, garden and most notably, your trash can! Ideally, having raccoons nearby or even on your property isn't something you want to deal with. As a...

This site is owned and operated by Pest Pointers LLC | pestpointers.com is a participant in the Amazon Services LLC Associates Program, an affiliate advertising program designed to provide a means for sites to earn advertising fees by advertising and linking to Amazon.com. We are compensated for referring traffic and business to Amazon and other companies linked to on this site.